Miss USA, Prettiest of the Morons

I happened upon a couple of minutes near the end of the Miss USA pageant last night.  Normally I wouldn't watch such claptrap, but they were at the "ask the beauties about themselves and see if they can construct sentences" portion of the show, so I had to see how they did.
Most of it was pretty vapid.  And I don't mean Human-levels of vapidness, I'm talkin' a vapidness that surpasses even Beauty-Pageant-levels of vapid.
Just moronic, the answers were.
The highlight lowlight for me was Miss California.

(side note:  look at this picture.  She looks like an Alien monster.  Seriously.  This is supposed to be the epitome of American beauty?)
She was asked to expand on her apparent infatuation with history.  What is it about history that you like?
She said she really likes history, is "a huge history buff", and is totally obsessed with the Tudor and Stuart era.  I thought this was a rather specific and odd statement, but, okay, she likes that period of English history.  Okay.
Then she said we can always find her in the history section at the Barnes and Noble. Nothing wrong with that.
Then came the home-run: To reiterate her love of history, she said she watches a lot of TV, like Game Of Thrones and Camelot.
Let me repeat that:  As examples of history-based TV programs she watches, she singles out Game Of Thrones and Camelot.
Okay, I can forgive Camelot, even though practically everything about the King Arthur legend is pure speculation.
But there's no excuse for putting Game Of Thrones in any category even close to "history".

(the historically accurate map of Eastern Doesnotexist)
To her credit, she did quickly realize her own stupidity, and backtracked saying she realized those shows were more fantasy. But that doesn't negate the fact that she mentioned them as examples of history-based TV shows she likes. Moron.
Then, as if to re-prove how smart she was, and to prove that she did, in fact, watch programs of historical significance, she said she did watch and love shows like The Tudors.
The Tudors.
I derive joy thinking that she believes The Tudors is in any significant way historically accurate.
I further imagine that she gets her knowledge of French/Gallic history from Asterix and Obelix comics. 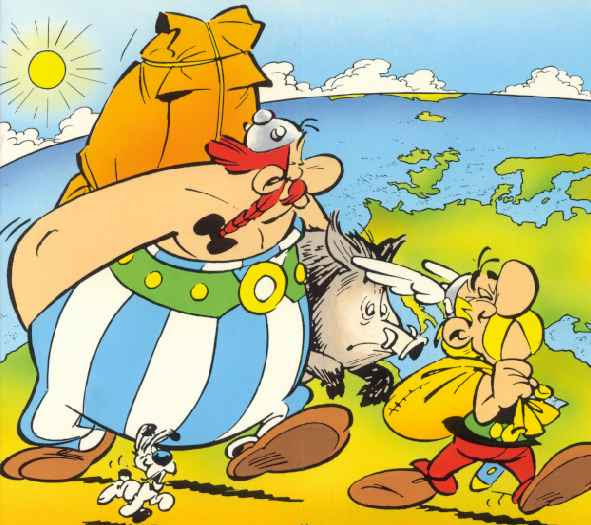