Getting Your Kicks - A Tall Hats Memory

This time last year, Graham & Lennie & Josh & Alicia & I were getting ready for "1864: The Tall Hat Chronicles". At the end of May, we were still shaping the show, and realized we had a number of sketches written that would, unfortunately, end up not being part of the show. Some of them were really great, but just didn't fit within the feel and flow of the show we ended up with.

One of those sketches, I wrote, is called "Getting Your Kicks". It would have been a video.
Mostly because of time constraints (we couldn't find a half-day to shoot it), we never did anything with it. It's too bad, as I think it'd be a terrific little video.
Maybe I'll get the gumption to get it done sometime and put it up somewhere. For now, if you'd like to read it, here it is below:

Graham would have played Theopolis (he played him in the stage show), Alicia would have been Sadie, and probably Lennie as Jam.

Tall Hats -  The Jam PSAs - Getting your Kicks


Location: in front of a field of horses, or old-timey stable.


Theopolis Desbrisay, his wife Sadie, and their son Jam.
Theo & Sadie in foreground, left.  They are fairly somber and stoic.
Jam a bit in background, right.  He is unfocused, throughout.  (his mind is unfocused, not camera-lens unfocused).
They speak directly to the camera.


Theopolis:  Hello, my name is Theopolis Desbrisay.  You know me as the owner-operator of Desbrisay’s Drugeroceria and Confectionarium here in Charlottetown.  This is my wife, Sadie Desbrisay.


(they look over at Jam.  CU of Jam being Jam.  Then they look back to camera)


Sadie: We’re here today to talk to you about a very serious issue affecting the youth of today.


Theo:  It’s a dangerous and foolhardy game of dare what’s been sweeping the barns and stables acrosst Prince Edward Island a couple years now.  I first heard about it in 1862. The young folk call it “Getting Your Kicks”.


Sadie:  Teenage boys.  Young men in their prime, daring each other in front of the girls, to see who can stand the longest behind a fidgety horse without getting kicked.  It’s stupidity incarnate!


Theo:  Whoever stands the longest without chickenin’ is the winner.  Jam here wasn’t a winner.


Sadie:  Jam got himself kicked in the head by a horse playing that stupid nonsense, and now look at him!


Theo:  One of the other boys hard-squeezed the horse’s testicles.  That’s what set him off.


Sadie:  You don’t hard-squeeze testicles!  Everyone knows that!  Now Jam is ruint!


Theo:  Now, we might not be able to stop young people from playing foolish games like Getting Your Kicks, but we can make it safer.  That is why, as of now, Desbrisay’s Drugeroceria and Confectionarium is selling a new type of horseshoe.  A safer type of horseshoe. (holds up a rubber horseshoe)  It’s made of a new material called rubber, and we urge all horse-owners to shod their horses with them.


(they look at Jam, smiling, expectantly.  He does nothing but be Jam, ie. does nothing. After a moment...)


Sadie: Softer Shoes for… (nothing from Jam)


Theo:  Jam.  Softer shoes for softer… (nothing)  Softer what, Jam.


Jam: … hampoes.  (or something similar that they can believe is him saying “horses”). 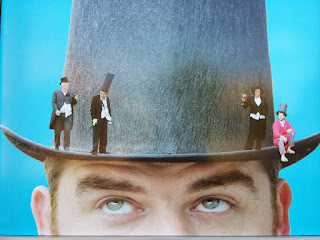